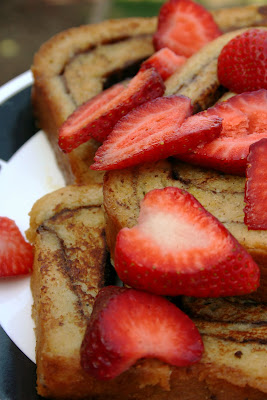 The first time I made french toast was a complete disaster. The recipe had called for flour and the end result was not pretty and left me nearly in tears in because I couldn’t make a simple thing like french toast.

This weekend I was determined to prove myself wrong, so, with a hungry boyfriend and a loaf of fresh-baked cinnamon bread, I tried again

Whisk together milk, eggs, sugar, vanilla, and salt with a fork.

Melt butter in a frying pan over medium heat.